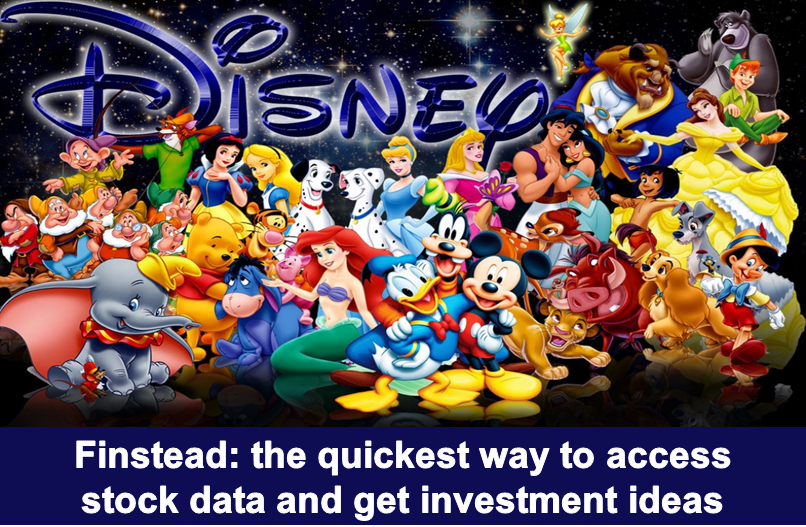 The Walt Disney Company operates Disney-branded businesses, entertainment parks, and media networks such as ESPN and ABC. Lately, the stock has performed well: it generated a return of 17% in the past year. The company agreed to sell the SKY network stake along with Fox to Comcast.

Investors are showing interest in the stock as they have confidence in the company’s strong product portfolio and brand value.  The opportunity for Disney to go direct-to-customer with its original content is significant.  On the other, few bearish investors worry about weaker-than-expected cable network segment revenues. Last quarter’s revenue rose 7.3% to $15.23 billion and earnings per share came at $1.87 per share compared to $1.58 for the same period last year.

Fourth-quarter results will be released after market close on November 08, 2018. Analysts expect the company to earn $1.33 per share on revenue of $13.72 billion. The company missed analysts' estimates three times in the previous four quarters.

What is the sentiment towards the DIS stock? Our technical analysis shows that: 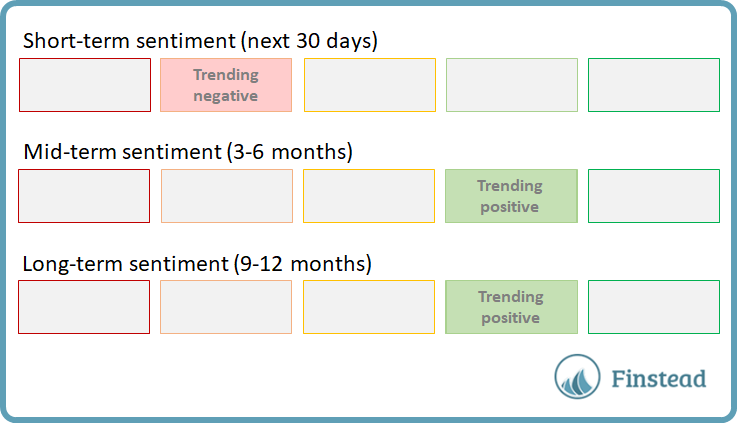 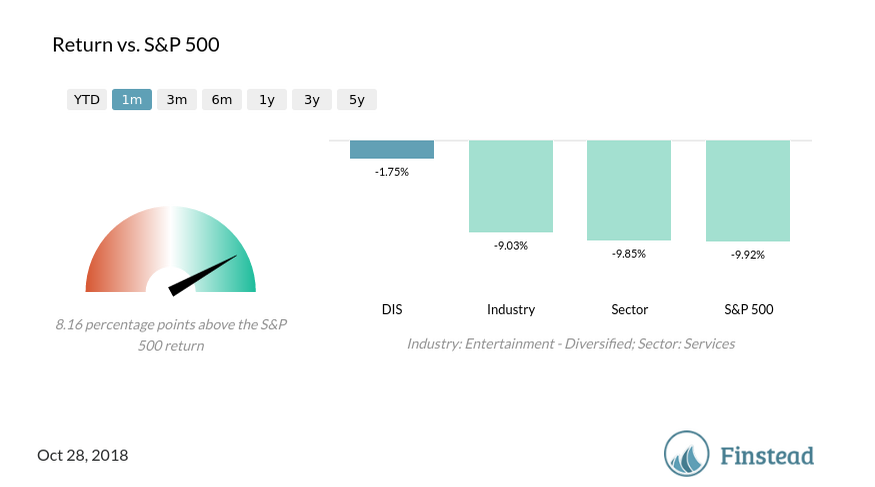 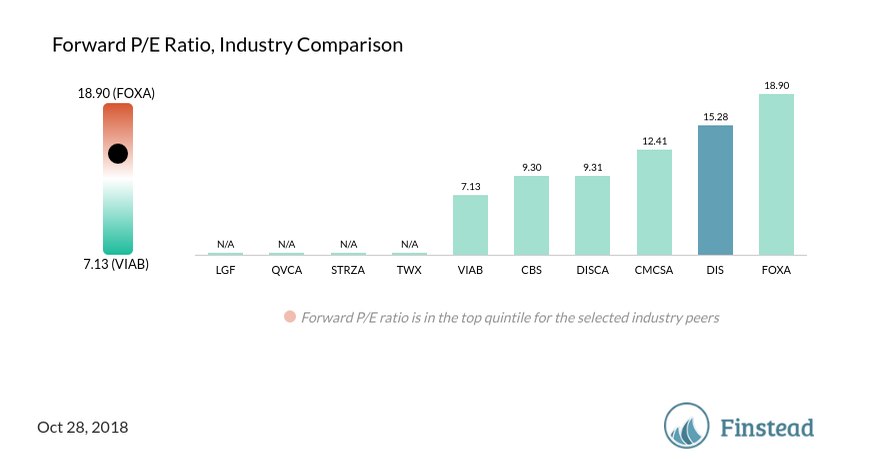 For the latest price and information on Walt Disney Company, please visit Finstead and search for "DIS price" or "DIS news". 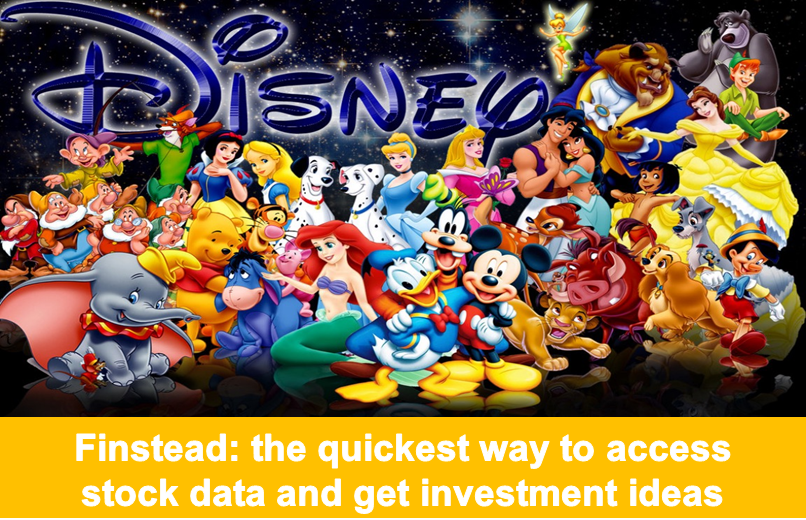 Walt Disney Company (The) (DIS) is expected to report earnings on August 7 after market close. The report will be for the fiscal quarter ending June 2018. Shares are trading at 112.63, up 0.01%.

What are DIS earnings expectations?  What news should investors be paying attention to?

The crown jewel of Disney's media networks segment is ESPN. It dominates domestic sports television with its 24-hour programming on ESPN, ESPN2, and its growing sister networks. ESPN has exclusive rights with NFL and college football, and profits from the highest affiliate fees per subscriber of any cable channel.  It generates revenue from advertisers interested in reaching adult males ages 18-49, a key advertising demographic that watches less scripted television than other groups.

The Disney Channel benefits from attractive economics, as its programming consists of internally generated hits with Disney's vast library of feature films and animated characters.

Walt Disney relies on the world-class Disney brand, sought after by children and trusted by parents. Over the past decade, Disney has demonstrated its ability to monetize its characters and franchises across multiple platforms--movies, home video, merchandising, theme parks, and even musicals. The stable of animated franchises will continue to grow as more popular movies get released by the animated studio and Pixar, which has already generated hits such as Toy Story, Cars, and most recently Frozen.

On July 19, Comcast announced that it is ending its pursuit of Twenty-First Century Fox assets to focus on acquiring Sky. The capitulation cleared the way for Walt Disney to acquire the Fox assets.  The shareholders approved the $71 billion deal between the two companies, clearing another hurdle for a deal that will rattle the media and entertainment landscape and could inspire a wave of similar tie-ups.

Walt Disney Co. has a mixed history of beating analysts’ earnings estimates.  In the past four quarters, the company: 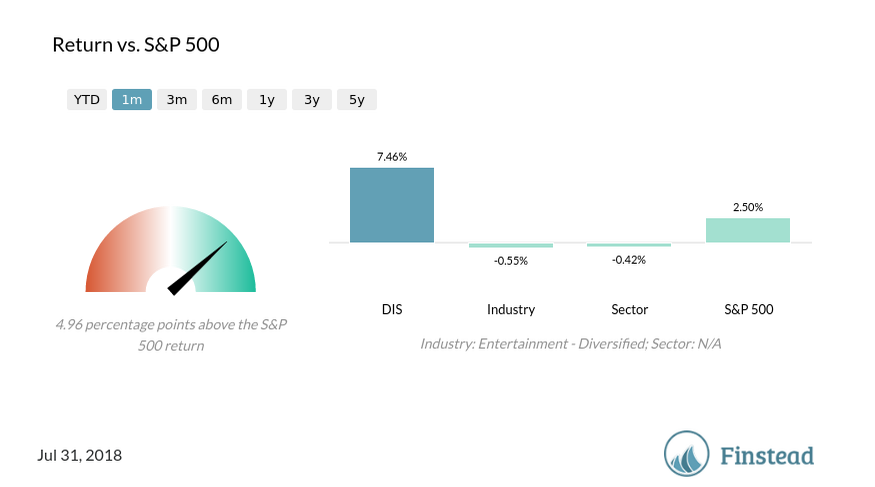 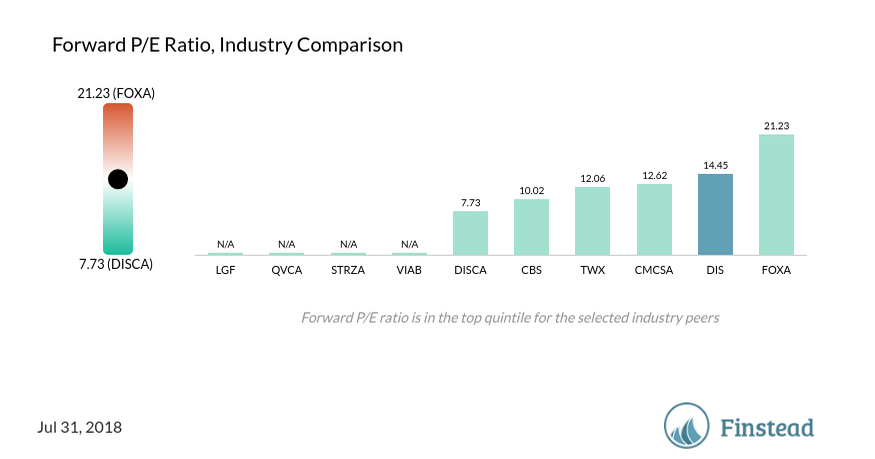 For the latest price and information on Walt Disney Company (The), please visit Finstead and search for "DIS price" or "DIS news".

Before we start: if you're looking for DIS stock price, you can quickly find it out by visiting Finny and typing "DIS quote". If you're looking for a quick scoop on DIS stock (chart, price target, market cap, news and buy or sell analysis), go to Finny and look for "DIS". You'll get all this info in one place. Or you can just type "DIS news" to get the latest stock news.

Looking to buy or sell Walt Disney Company (The) (DIS)? Interested in getting the full scoop on DIS, including earnings and dividends, stock forecast, buy or sell analysis and key stats? If so, you came to the right place.

In this DIS stock guide, we'll address key questions about DIS, above and beyond what you can find on Yahoo Finance, Zacks, MarketWatch or Morningstar.

And here is the list of questions we'll answer:
1. What are DIS earnings?
2. What is DIS stock forecast (i.e., prediction)?
3. DIS buy or sell? What is DIS Finny Score?
4. What are the reasons to buy DIS? Why should I buy DIS stock?
5. What are the reasons to sell DIS? Why should I sell DIS stock?
6. What are DIS key stats: revenue, market cap, revenue growth, profit margin, P/E ratio, P/B ratio industry, sector, and number of employees?

1. What are DIS earnings?

3. DIS buy or sell? What is DIS Finny Score?

4. What are the reasons to buy DIS? Why should I buy DIS stock?

Here are the reasons to buy DIS stock:

5. What are the reasons to sell DIS? Why should I sell DIS stock?

Let's look at the reasons to sell DIS stock (i.e., the bear case):

Let's look at the key statistics for DIS: