The jobs economy is undergoing a transformation

As you’ve likely gathered by now, the way we work will probably never be the same. Although it might seem like 2020 represented a great shift in the jobs economy and worker mentality as a whole, it really just hit the fast-forward button on an already prevalent trend.

The US Labor Force Participation Rate, a measure of employed citizens over the age of 16, is at its lowest point in over 4 decades, at about 62% as of the end of June 2021. It dropped off 3% from 2008-2012 and took another dip last year at the onset of the pandemic. 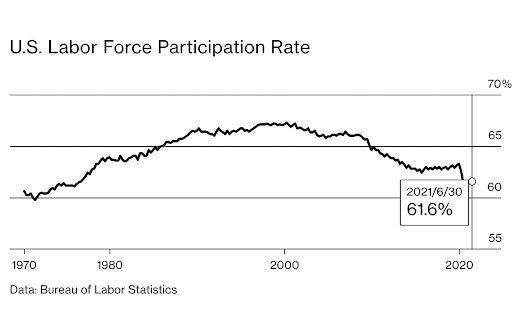 The rate has been falling pretty consistently for the better part of four to five decades, so it’s not just the pandemic that’s at fault here. Remaining stimulus benefits and health-related issues may be undermining our recovery to some degree, but not enough to reverse the bigger picture.

The future of the workforce

Moving forward, it’s fair to ask, where do we go from here? The answer is probably the same place we’ve always gone: forward. Things change all the time, and the economy and the people within it eventually adapt accordingly.

It won’t be a sweeping motion of changes where everyone’s job is taken over by automated intelligence and driverless vehicles, but more of a gradual shift towards a new kind of economy.

There will certainly be growing pains and incongruencies along the way, but we can remain hopeful that 2020 and this evolving labor force will eventually coalesce to form something new and better, and perhaps we can look back on this pivotal period as simply a time of change, growing pains and innovation.

The great remodeling of the workplace

The minimum wage crisis isn't as simple as it seems