Vanguard VEA Review: 19 Key Things You Should Know About This ETF 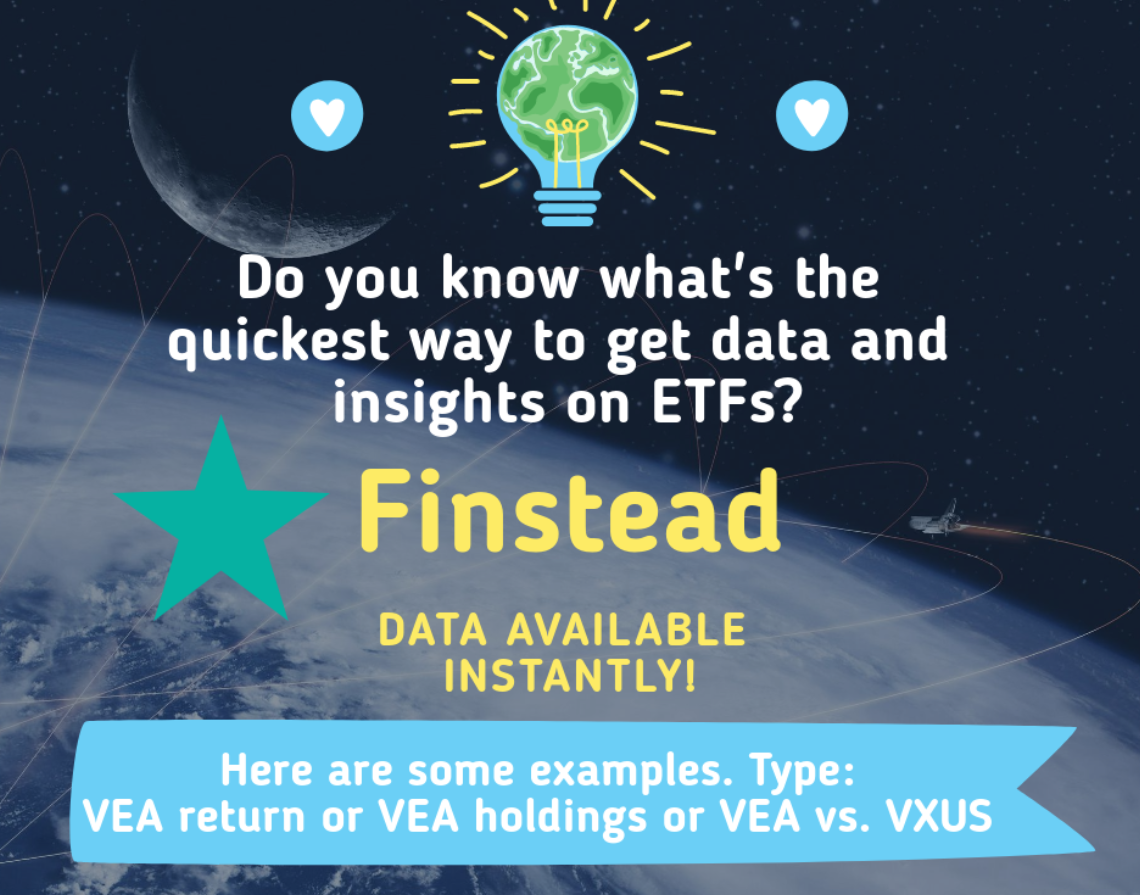 In this VEA Vanguard FTSE Developed Markets ETF (NYSEARCA: VEA) review, we’ll address key questions our readers have been asking us about this ETF (such as VEA holdings, VEA price history, VEA dividend yield, VEA expense ratio and alternatives--VEA vs. VXUS, VEA vs. VEU, VEA vs. VTI, VEA vs. IEFA, VEA vs. VOO, VEA vs. VGK, VEA vs. EFA, VEA vs. VWO, and VEA vs. SCHF), beyond what you can normally find on Morningstar.  We'll also address some of the popular questions about VEA asked on the Bogleheads forum.

VEA is a top 3 international (ex-US) fund by assets and is hugely popular among individual investors.  It's an exchange-traded fund (ETF), requiring no minimum investment.

Here are the topics we'll cover in this review:

So let’s start.  Scroll down to a question that interests you the most.

VEA is an ETF that tracks the performance of stocks issued by companies headquartered in the major European and Asia-Pacific markets. VEA employs an indexing investment approach, just like many other ETFs do.

2. What is the underlying index for VEA?

It is FTSE (Financial Times Stock Exchange) Developed All Cap ex-US Index.  It includes major European and Asian stocks and excludes those from the US (hence it's called ex-US).

3. How many stocks does VEA have as its holdings?

The top 10 holdings represent 8.76% of total VEA assets.  Here are the top holdings.

4. How did VEA perform historically? 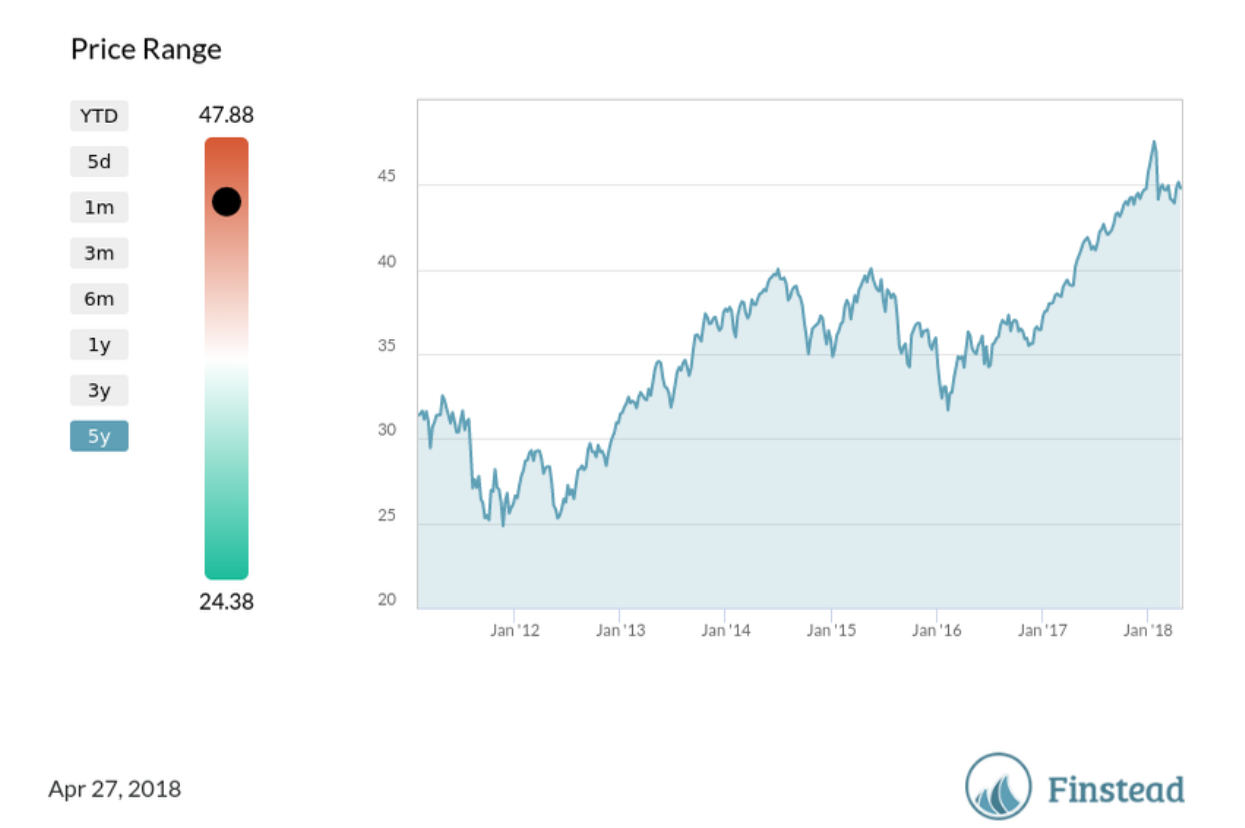 6. What is VEA expense ratio?

VEA expense ratio is 0.07%. The expense ratio of a fund is the total percentage of fund assets used for administrative, management, and all other expenses.

This expense ratio level is relatively low.  It's one of the lowest among international ETFs.

VEA tax-cost ratio is 0.78%. The tax-cost ratio measures how much a fund’s annualized return is diminished by the taxes investors pay on distributions. ETFs like VEA regularly distribute dividends and capital gains.

8. What is VEA beta? How would you assess the risk of investing in VEA? 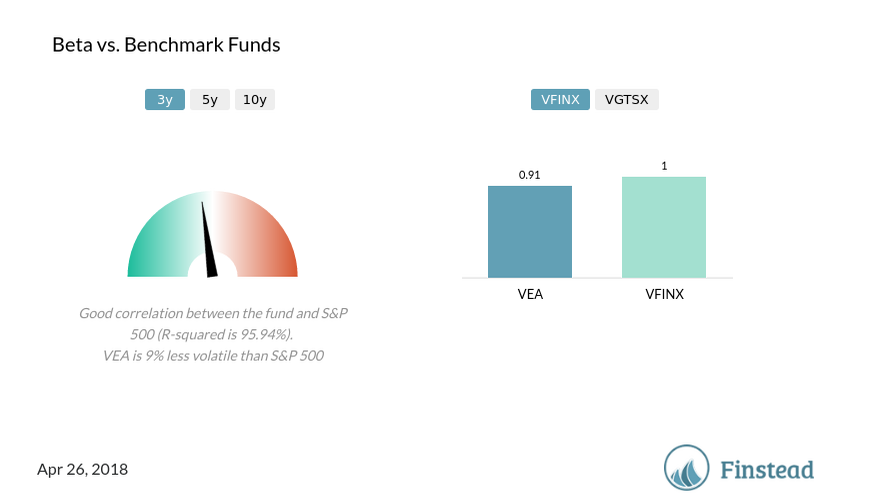 9. What is VEA Sharpe ratio?

The 3-year Sharpe ratio for VEA is 0.88. The Sharpe ratio is the average return earned in excess of the risk-free rate per unit of volatility or total risk. Generally, the greater the value of the Sharpe ratio, the more attractive the risk-adjusted return. 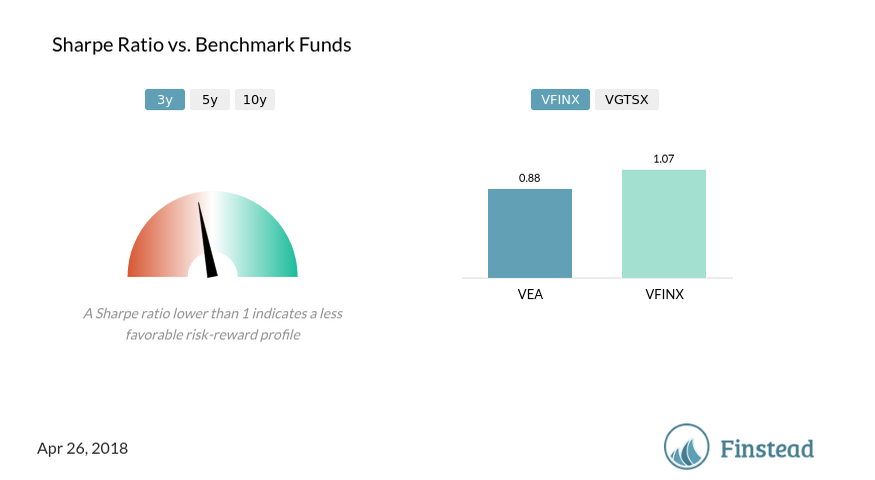 The fact that VEA has a lower risk-adjusted return than US large-cap index funds doesn't mean that you should not invest in it.  In fact, we recommend that a certain percentage of your investment assets be allocated to international funds (VEA is just one of the options).

Below is the chart of the most recent dividend payments for VEA that includes ex/effective date, cash amount, declaration, record, and payment date. 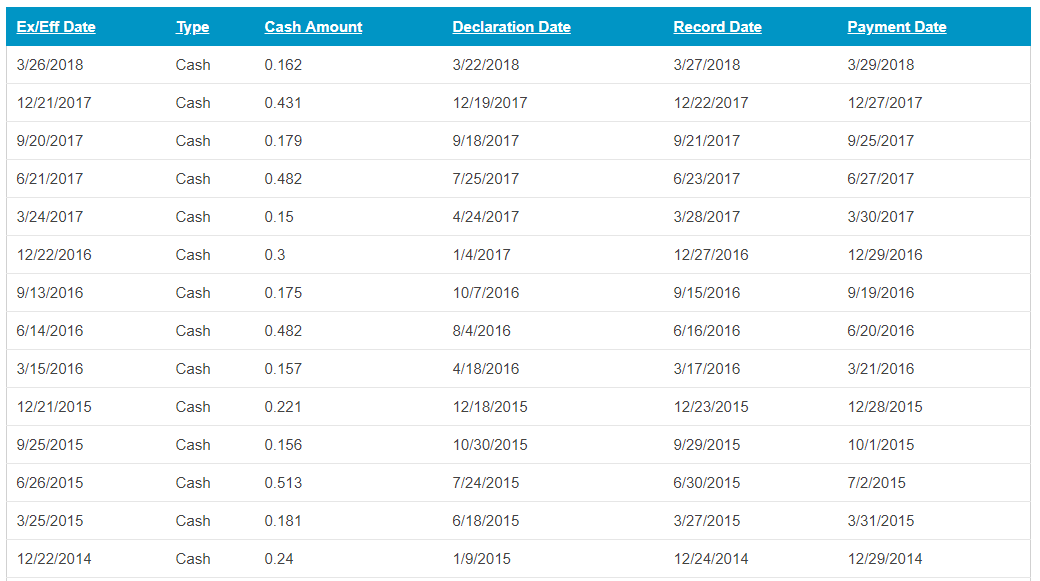 VOO is focused on large US stocks (and tracks S&P 500), while VEA is a total market ETF that focuses on stocks from other developed countries, excluding the US.

Performance-wise, VOO did better than VEA; however, their focus is completely different and we recommend owning both international and US ETFs in your ETF portfolio.

Below is a detailed comparison table between VEA and VOO.

A little more about VOO: This fund tracks the performance of S&P 500. The ETF replicates S&P 500 by investing all of its assets in the stocks that make up the Index with the same approximate market-cap weightings as the Index.

VGK seeks to match the performance of the FTSE Developed Europe Index.   VGK net assets are $19.63B, and its expense ratio is 0.10%, slightly higher than VEA's.

VEA, on the other hand, focuses on all developed countries outside the US.  VEA has around 3,800 holdings, while VGK has around 1,250.

Over the last one, three and five years, VGK has performed slightly better than VEA, but that should not be a sole reason for selecting this ETF.

Here is the full comparison between VEA and VGK:

Here are the top holdings represented in the VGK ETF: 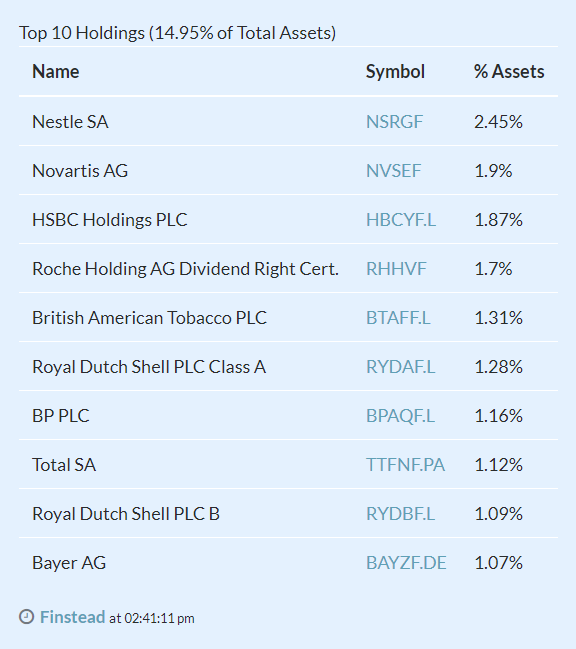 VTI tracks the performance of a benchmark index that measures the return of the overall US stock market. This ETF's underlying index is CRSP US Total Market Index.

VTI's focus is the US, while VEA's focus is international (more specifically, developed countries outside the US).

VTI has performed better historically than VEA, but that should not be a sole reason for selecting it.

Below is a comprehensive comparison table between VEA and VTI.

EFA tracks securities in developed European, Australasian and Far-Eastern markets, as measured by the MSCI EAFE Index. The Index has been developed by MSCI as an equity benchmark for its international stock performance and covers only developed markets.  It excludes the US and Canada, and small-cap stocks.

EFA's issuer is Blackrock (iShares), whereas VEA comes from the Vanguard family.

The historical performance of VEA and EFA is comparable.

Below is a detailed comparison table between VEA and EFA.

VEA's coverage is broader than SCHF's: it includes 3,800 stocks vs. ~1,400 for SCHF.  VEA includes a greater number of small-cap stocks than SCHF.

The two funds have comparable performance, VEA's returns are slightly higher than SCHF's.

Below is a detailed comparison table between VEA and SCHF.

VWO tracks FTSE Emerging Markets All Cap China A Inclusion Index that measures the return of stocks issued by companies located in emerging markets, including China.

VEA focuses on developed markets outside the US, while VWO covers emerging markets.

Both ETFs have a large number of holdings--roughly 3,800.

VEA has performed better than VWO in the long run, but worse in the short term.   However, that should not be a sufficient reason for selecting one over the other, since the two ETFs have two completely different focuses.

Below is a detailed comparison table between VEA and VWO.

IEFA tracks the MSCI EAFE Investable Market Index. This Index is designed to measure large-, mid-, and small-cap stocks from Europe, Australasia, and the Far East.

IEFA issuer is BlackRock, while VEA's underwriter is Vanguard.

IEFA has around 2,500 holdings, whereas VEA has around 3,800.  VEA is more broadly diversified.

Performance wise, these two funds are fairly comparable, although IEFA has done somewhat better over the course of last 5 years.

Below is a detailed comparison table between VEA and IEFA.

VXUS tracks the performance of the FTSE Global All Cap ex US Index, a market capitalization weighted index designed to measure market performance of companies located in developed and emerging markets, excluding the United States.

VEA, on the other hand, tracks performance companies located only in developed markets outside the US.

Performance wise, these two funds are comparable, although VXUS has more recently generated better returns than VEA.  This has been particularly pronounced in the last 3 years.

Below is a comparison table between VEA and VXUS.

VEU tracks the performance of companies located in developed and emerging markets around the world. The Fund's underlying index is FTSE/(R)/ All-World ex USA Index, which is a market-cap-weighted index of large- and mid-cap non-US stocks.

VEU has around 5,400 holdings, while VEA covers approximately 3,800 stocks.

Below is a detailed comparison between VEA and VEU.

If you're looking for additional ideas for Vanguard ETF investing, you may want to watch this Youtube video:

We hope this review has given you a perspective on VEA performance (returns, expenses, dividend yield) and alternative choices (VEA vs. VXUS, VEA vs. VEU, VEA vs. VTI, VEA vs. IEFA, VEA vs. VOO, VEA vs. VGK, VEA vs. EFA, VEA vs. VWO, and VEA vs. SCHF). 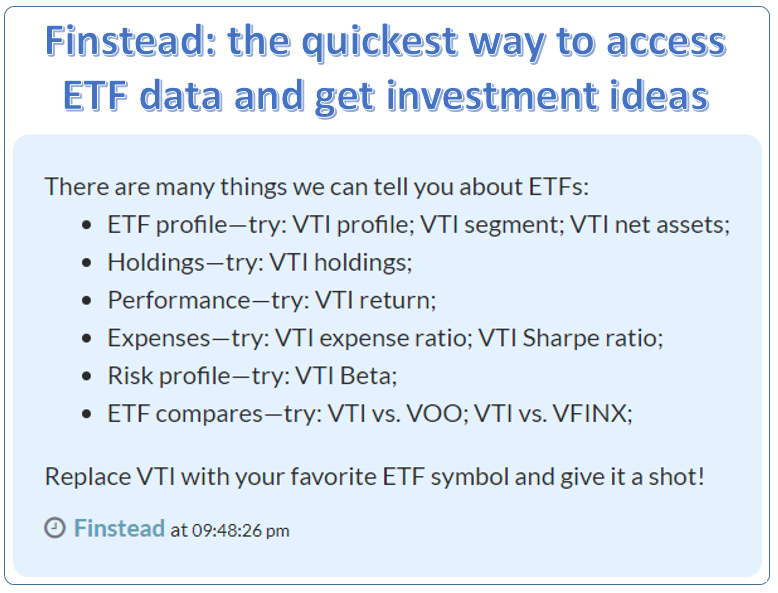 If you have any questions or comments, send us an email at: hi [at] finstead [dot] com.