LearnThe GistDiscussCommunityAchievementsRewards
🐻 The market pullback
September 21, 2021
The Gist
TOGETHER WITH

Happy Tuesday. Based on data released by the Census Bureau, the median US household income in 2020 compared to 2019: a. increased 2.9%, b. stayed the same, c. decreased 2.9%. Check the answer in the "Trending" section below.

Here are the personal finance topics for today:

The boy who cried market pullback 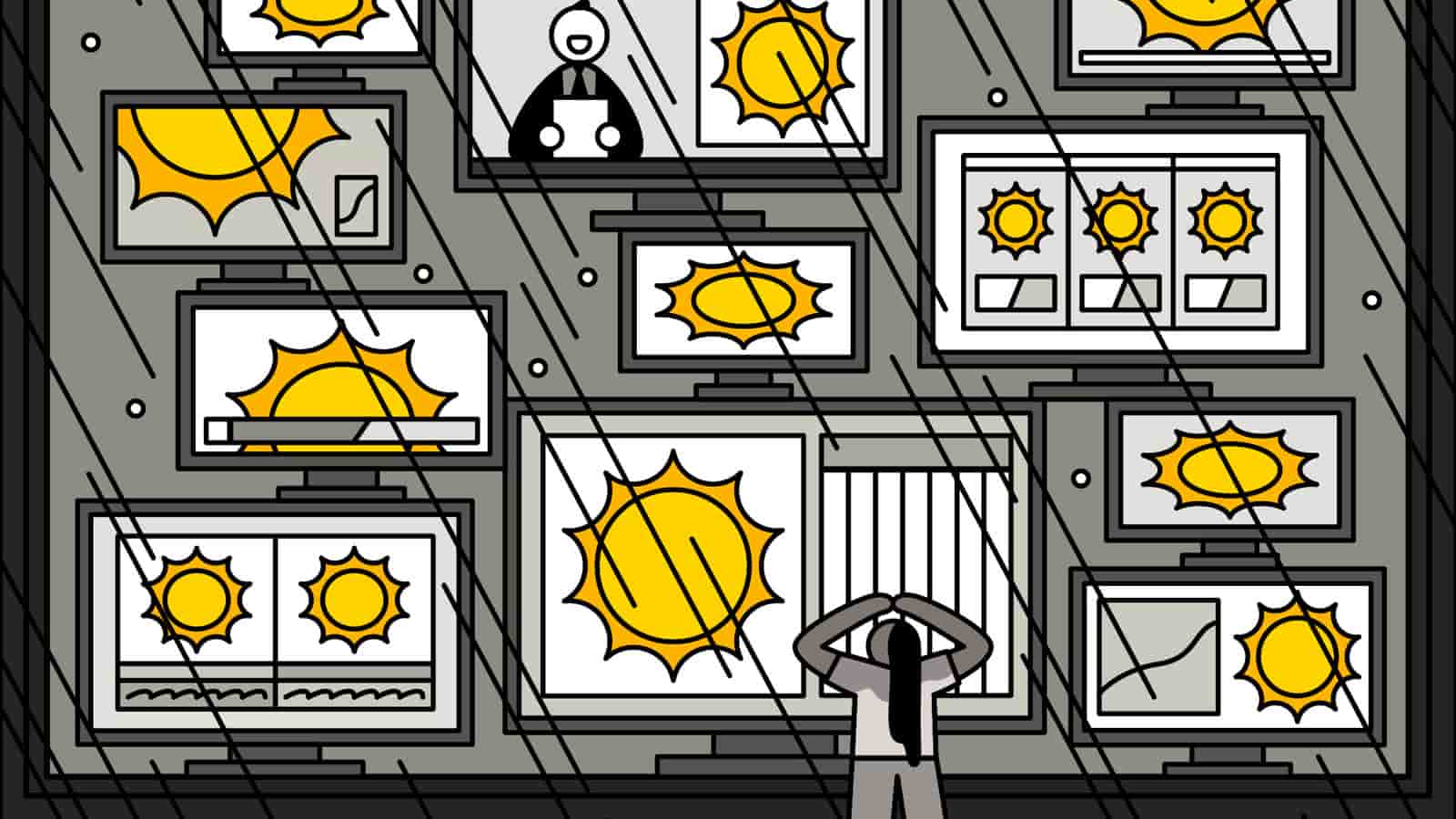 Some market analysts and prognosticators have been calling for a pullback since last year’s exaggerated pandemic rebound, and now it may finally be their time to shine.

Although predicting the patterns of an irrational, sentiment-driven market is still an inexact science, there are a lot of indicators being used to make forecasts like these with good faith and history behind them. These stock market meteorologists are a bit more reputable than the boy who cried wolf. 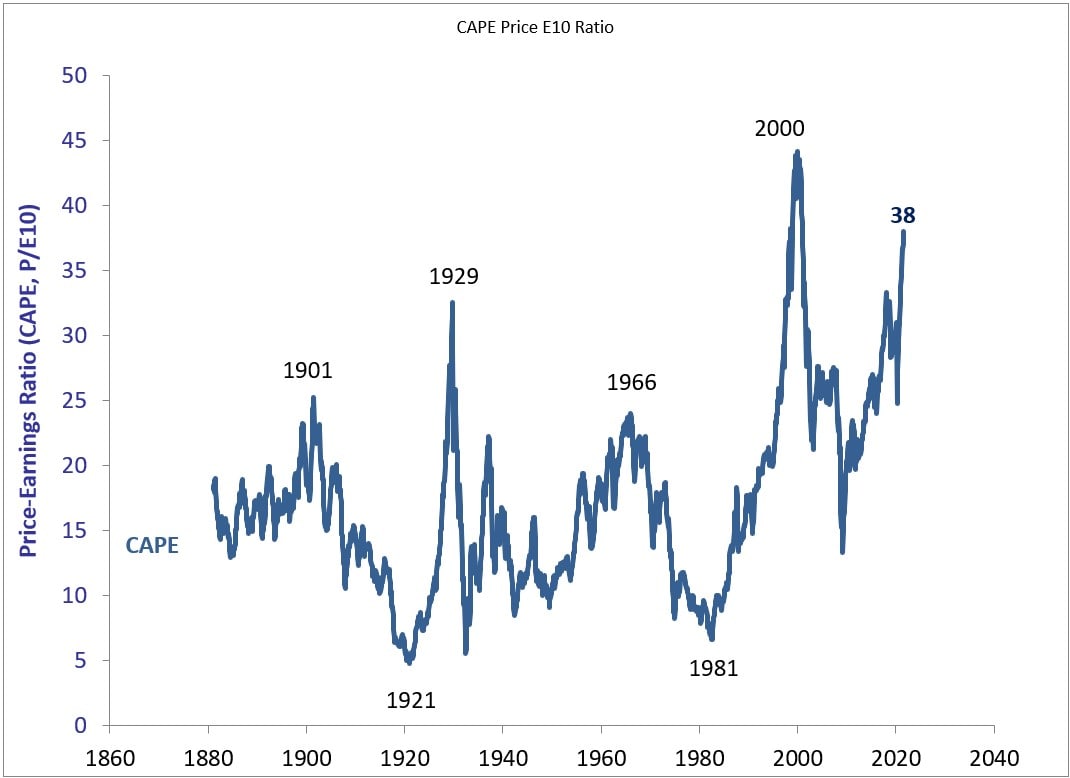 Source: A Wealth of Common Sense

Making sense of it

Financial institutions are seemingly taking the position that it’s going to be slim-picking in the US markets over the next 12 months. With high-flying ratios and indices that are bumping up on all-time highs even more so than usual, they seem to be moving overtly defensive in their strategies.

There’s a lot of news investors will have to sift through in the coming months too—inflation data, tapering, covid variants, a redlining housing market, fear and contagion sweeping financial markets from the troubled China property market, and inevitable unforeseen factors—with each representing a potential correction catalyst.

🧮 In due diligence (DD) mode and need a refresher on what fundamental analysis means?   Take this bite-sized lesson in 6 minutes:

What is Fundamental Analysis?
Investing
6 min

Household debt is the heirloom that appreciates 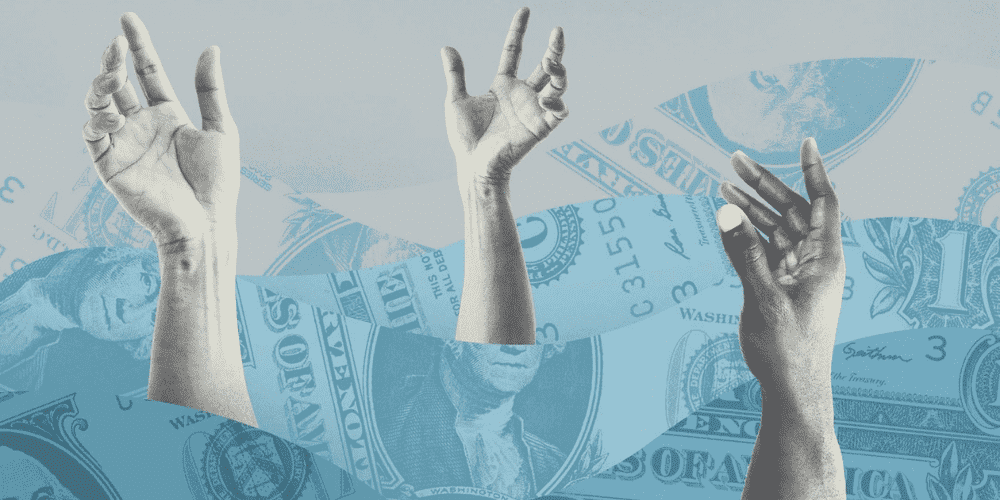 Debt makes the world go round. Okay, more like the economy and modern life, but you get the gist. It’s because of debt and the debated fractional reserve lending system that we’re able to start a business, buy a car, or get a mortgage. For better or for worse, debt kind of runs the country.

Debt can be a good investment when it’s owed to you, and not always when you owe it. Although household debt doesn’t get ‘passed down’ in the most traditional sense, the proverbial financial burden of debt placed in each subsequent generation is something that’s been increasing over time.

It wasn’t always this way

Debt hasn’t always been as conveniently accessible as it is today. Credit cards didn’t exist until 1950, most Americans didn’t even own a car up until that time, student loans owed by graduation have increased by 326% since 1970, and mortgage debt has increased exponentially over the last 70 years.

Fun fact: In 1862 the US government actually gave away 270 million acres of land with Lincoln’s Homestead Act. That came out to about 160 acres of land per family that could be passed down over generations, without a loan. In 2021, essentially all land is accounted for. Things haven’t always been this compartmentalized and debt-oriented.

So, the generational debt snowball grows

According to data from Experian, Generation X is at its peak debt-saddled stage of life right now, holding an average household total of over $140,000 each, mostly consisting of mortgages. Behind them are the Baby Boomers, who average a $97K per household number made up of again, mostly mortgage debt, but growing at a lesser rate.

Millennials are an average of $87K in the hole, but that number is growing at the second-highest rate amongst the generations, and it’s reasonable to expect this age cohort to someday outdo Gen X. A large portion of their debt is consumed by student loans and credit card debt, as is the case with Gen Z, who despite their low total of $16K, saw their debt jump by 67% from 2019-2020. 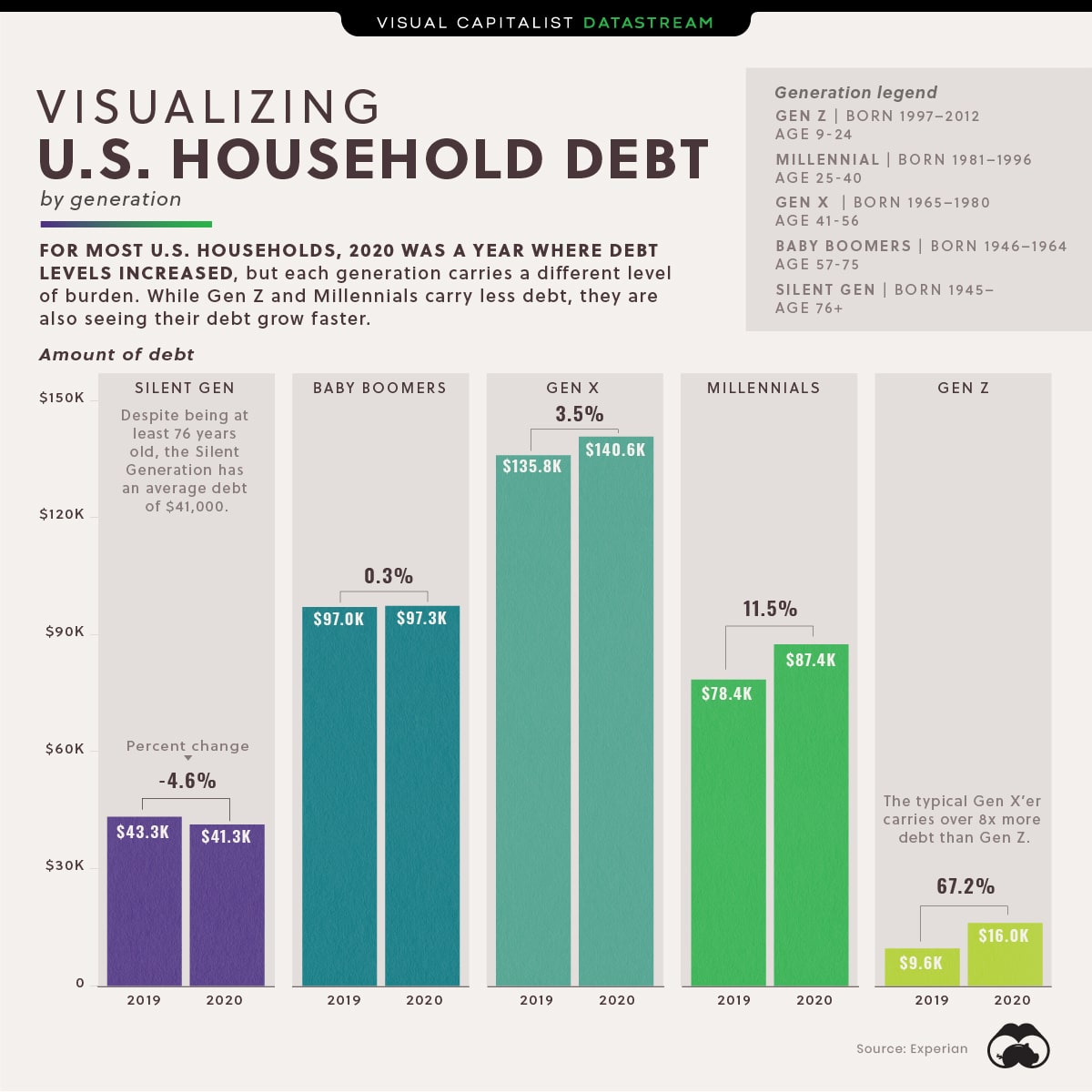 What do we do with this information?

Some things are just interesting to know and nothing more, but there is one takeaway we can glean from this data, and it’s being aware of how easy it is to fall deep into debt. Not all debt is bad debt, but even good debt can go bad if mismanaged. So we should be exceedingly cautious about taking on more liabilities.

Think twice about paying that tuition just because it’s been a dream school, make sure that mortgage isn’t 50% of your income and maybe don’t use that credit card on the new iPhone 13 just yet. We can’t control the financial system, but we can control our personal finances.

💳 New to managing your debt and want some insights that can help you plan your way out of it? Take this lesson:

Plan Your Way Out of Debt
Debt Management
5 min

Understanding crypto doesn’t get easier than this 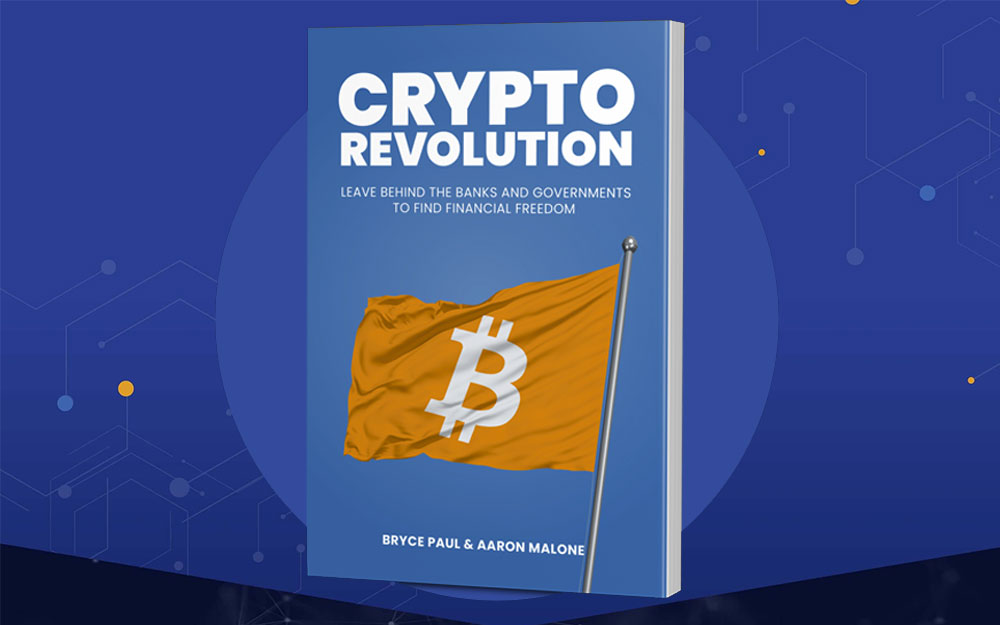 Brought to you by the co-hosts of the world’s largest crypto podcast, CRYPTO 101, Bryce Paul & Aaron Malone walk you through the fascinating world of blockchain technology and cryptocurrencies in their book Crypto Revolution.

Part history book and part instructional guide, Crypto Revolution will show you exactly why cryptocurrencies are not just globally disruptive, it will change the way we buy, sell, and even live.

This book includes how-tos on getting started in the industry, tips on safely buying, selling and storing cryptocurrencies, and how to evaluate potentially good investments.

Get your free copy of Crypto Revolution and other bonus resources, all for the price of shipping!

The scoop on paycheck advance apps 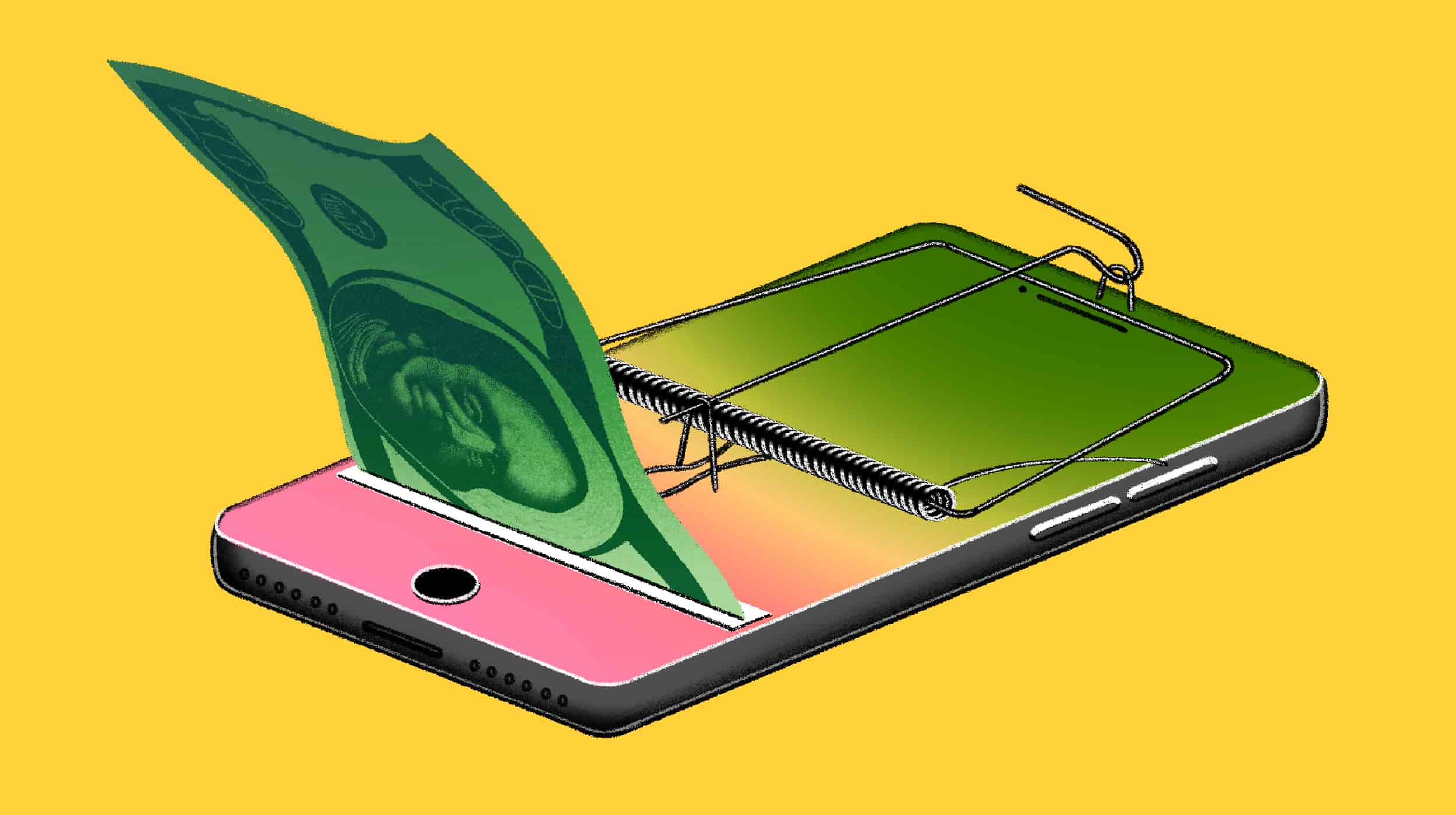 Paycheck advance apps, like Earnin or Dave, are gaining in popularity because they let you borrow a small amount of your expected earnings to cover costs for things you may not immediately have money for, like groceries, a telephone bill, or even a car repair. The idea is that you borrow a small amount of money for a short period of time, usually in exchange for a small fee, and repay it when you get your next paycheck.

Some of these paycheck advance apps have caveats that are often dismissed from the advertisements and only found in the fine print, and they’re worth scrutinizing before engaging.